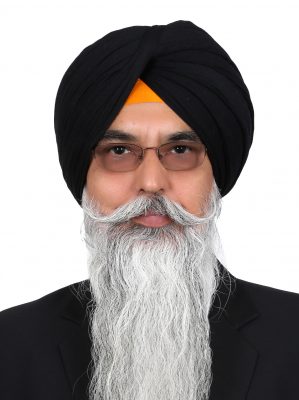 Navkiran Singh: A man with a mission, Navkiran Singh is the General Secretary of the organization. The growth and development of the organization has its debt to him. Born on June 6, 1961, he is the only son of a known senior civil lawyer of Chandigarh, Gurmukh Singh. Father of two, his wife is also a lawyer and helps him in the social service. He completed his law in 1986 and followed in the footsteps of his father and joined legal profession. He remained as an associate of Mr. Amar Singh Chahal for some time and then started practicing independently in the Punjab & Haryana High Court at Chandigarh and came to be known as an expert on human rights law and criminal law. Having a soft heart towards the victims of injustice, he got seriously involved in the campaign to provide free legal aid to the poor and indigent persons, started by his organization, which he is continuing even till today. In 1991, he even escaped an attempt on his life at the hands of Chandigarh Police, when he tried to rescue a boy who had been acquitted by the court and whom the police wanted to re-arrest after his acquittal. He was shot at by the cops, but escaped unhurt by Gods grace. He was then given a severe beating in a busy market place and kept in illegal detention.

From 1986, he undertook the task of fighting cases against police brutality and elimination of Sikh youth in fake encounter, custodial torture, extra- judicial methods and other heinous crimes by the Punjab Police , very courageously. He did all these cases on pro-bono basis and even spent miscellaneous expenses from his pocket. By now, he has filed more than two thousand petitions highlighting cases of various human rights violations committed by the Punjab police in the supreme court, High Court, National human rights commission and Punjab state Human Rights Commission and other foras. He has been successful in getting judicial or independent inquiries into many cases of human rights violations. He is responsible for bringing to dock more than a hundred police officers and their prosecution and conviction in equal number of cases. Due to his overzealous activities against state repression and cruel police officers, he is known as a dare devil lawyer among the violators. He is committed to the cause of human rights to the core.

When a young lawyer member of the organization, Mr. Kulwant Singh saini along with his wife and three years old child were brutally killed by Punjab Police in Ropar in 1995, he was instrumental in bringing together all the lawyer bodies in Punjab, Haryana and Chandigarh to a common platform to express its anguish at this dastardly act and demanded a judicial inquiry into the whereabouts of the lawyers family and punishment to the guilty police officials. The petition filed by the Punjab & Haryana High Court Bar Association, was sadly dismissed by the High Court. Then, Mr. Navkiran Singh filed the appeal in the Supreme Court, argued on behalf of the Punjab and Haryana High Court Bar Association, and succeeded in getting a C.B.I. inquiry y into the disappearance of the lawyer’s family. He also filed another pettion in the supreme court of India seeking protection to the life of lawyers in Punjab apprehending threat to their lives at the hands of Punjab Police. More than hundred cases successfully conducted by him concerning human rights issues are being cited in the courts.

Performing the duty is the General Secretary of the organization, he has led many investigations into thee custodial deaths, and other cases of human rights violations. He has trained many members of the organization by imparting legal knowledge as well as practical training to undertake investigation and preparation of reports of investigation done by them. He had been going to different districts Punjab and Haryana in order to bring many like-minded lawyers to one platform. At present there are more than three hundred active members of the organization who are providing free legal aid to the poor and indigent persons in their respective areas.

He is also the member of International Bar Association, Commonwealth Lawyers Association, besides an active member of the Supreme Court Bar Association and Punjab and Haryana Court Bar Association. He has visited USA, UK and Canada number of times and has appeared as an expert witness on human rights in foreign courts in the matters relating to extradition and refugee claims. He has also attended four United Nations sub-committee meetings on Involuntary disappearances and extra-judicial killings in Geneva (Switzerland) and New York and placed before the sub-committee around five hundred cases.He also has the honour of being the only Indian lawyer Who is working as a defence counsel in the infamous case of Air India air crash which took place in 1985 and the trial is taking place in Vancouver, Canada.